NCSF has almost 100 Coalition Partners who provide strategic and policy planning, and set general goals for the Board to follow and implement. NCSF also has a growing list of Supporting Members who support our mission:

The NCSF is committed to creating a political, legal and social environment in the US that advances equal rights for consenting adults who engage in alternative sexual and relationship expressions. The NCSF aims to advance the rights of, and advocate for consenting adults in the BDSM-Leather-Fetish, Swing, and Polyamory Communities. We pursue our vision through direct services, education, advocacy, and outreach, in conjunction with our partners, to directly benefit these communities. 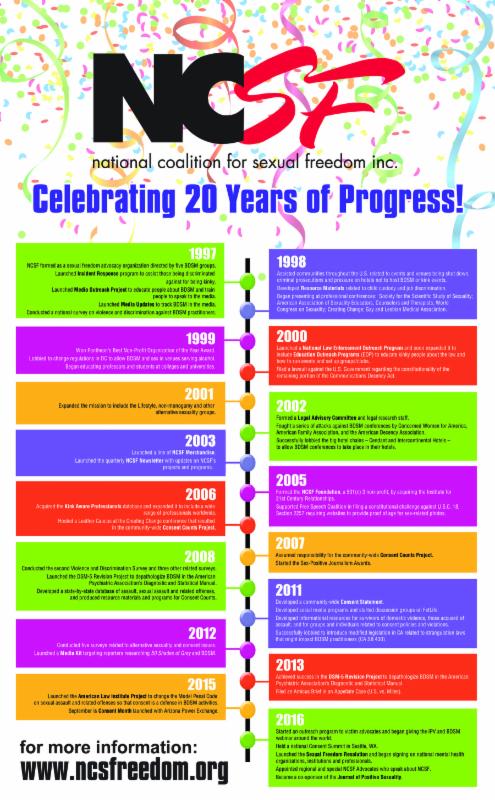 Hard at Work to Defend Your Rights!

1997  National Coalition for Sexual Freedom (NCSF) was formed in 1997 by Susan Wright under the auspices of the New York SM Activists. The goal was to fight for sexual freedom and privacy rights for all adults who engage in safe, sane and consensual behavior. The founding Coalition Partners were:

1997 – Launched Incident Response program to directly help people who are being discriminated against for being kinky.

2000 – Launched a national law enforcement outreach program and soon expanded it to include educational outreach programs (EOP) to educate kinky people about the law and how to run events and set up groups/clubs.

2000 – Filed a lawsuit against the U.S. Government regarding the constitutionality of the remaining portion of the Communications Decency Act.

2002 – Expanded the NCSF mission to include the Lifestyle, non-monogamy and other alternative sexuality groups.

2003 – Launched a line of NCSF merchandise in the NCSF Shop.

2003 – Launched the quarterly NCSF Newsletter that contains updates on NCSF’s projects and programs.

2005 – Formed the NCSF Foundation, a 501(c) 3 non-profit, by acquiring the Institute for 21st Century Relationships.

2006 – Acquired the Kink Aware Professionals database and expanded it to include a wide range of professionals worldwide.

2006 – Hosted a Leather Caucus at the Creating Change conference that resulted in the community-wide Consent Counts Project.

2008 – Conducted the second Violence and Discrimination Survey and three other surveys related to alternative sexuality.

2011 – Developed informational resources for victims of domestic violence, those accused of assault and for groups and individuals related to consent policies and violations under the Consent Counts Program.

2016 – Began appointing regional and special NCSF Advocates who do outreach for NCSF.

2016 – Became a co-sponsor of the Journal of Positive Sexuality.

2019 – Filed an Amicus Brief with our allies on the harms done by FOSTA/SESTA in Woodhull Freedom Foundation et al vs. U.S.

2019 – Launched Metamour Day as an annual event on February 28th.

2019 – Launched a series of Consent Signs to help groups and events announce their own consent culture.

2020 – Launched the Consent Survey with University of North Carolina Charlotte

Learn More about the NCSF

NCSF Board and Staff

What's Happening at the NCSF