The World Health Organization (WHO) follows the Nordic countries in repealing sexual minorities with consenting practices from the International Classification of Diseases in the new revision ICD-11.

“This is a milestone in the work for human rights and sexual liberation,” says Ingvild Endestad, leader of FRI, the Norwegian LGBT organization for sexual and gender diversity. “Consensual sexuality has nothing to do with psychiatry. This is an immensely important recognition of the sexual diversity among us,” she says.

Endestad gives Svein Skeid and FRI’s Revise F65 committee much of the credit for the victory. Human rights standards are part of the professional basis for the reform and the recommendations from Revise F65 are entirely taken into account.

“Denmark, which removed transvestism and sadomasochism from its national list of diseases in the 1990’s, was our big source of inspiration,” says Svein Skeid, the leader of Revise F65. Skeid and psychologist Odd Reiersøl started a ground-breaking cooperation across national borders and sexual orientations where dozens of activists, organizations and professionals contributed. 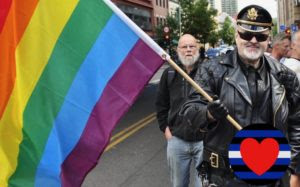 “It is very important for these individuals that society recognizes them as equal citizens,” expressed the director of the health department, Lars-Erik Holm, to the newspaper Dagens Nyheter November 11th 2008, when the three diagnoses were abolished in Sweden.

“I heard the news on a Norwegian radio station and understood that an equivalent removal could also be within reach in Norway,” Skeid tells.

“I had recently been in Stockholm during Europride and given the organization RFSU our arguments, he says. I became very touched by the Director General’s statement: ‘The health department wants to emphasize that these behaviors are neither illnesses nor perversions.’”

Within 6 years the diagnoses were repealed in all the Nordic countries, patterned after the Norwegian model and the pioneering work of Revise F65, psychologist Odd Reiersøl tells. Thus the pressure increased on The World Health Organization to follow suit. After a while Revise F65 achieved direct contact with the authorities in Geneva.

“In 2009 we received a commission from Senior Project Officer Dr. Geoffrey Reed, who has been the leader of WHO’s Working Group on Sexual Disorders and Sexual Health. This resulted in a 3 page report documenting that the diagnoses in question are outdated, non scientific, and stigmatizing,” says Reiersøl.

Dr. Reed asked for additional evidence, and November 11, 2011 ReviseF65 delivered a 50 page summary of research based knowledge, documenting that sadomasochism and sexual violence are two different phenomena. Among other things, the fetish/BDSM population has equivalent scores with the rest of the population regarding democratic values such as empathy, responsibility and gender equality.
Already the next day Dr. Reed gave feedback about perfect timing since the revision committee soon would have their very first meeting discussing the reports.

June 18th 2018 WHO published the revised ICD-11 based on current scientific evidence and human rights of vulnerable populations, in line with recommendations from Revise F65.

The implemention of ICD-11 will start immediately, while the final version will be adopted in 2019 after feedback from the member states to user guidance. The structure and coding of ICD-11, as well as the accompanying materials will, according to the WHO Working Group, remain unchanged.

Recent News from the NCSF